You can find the spider all-time near you. Most people often call the pest control service provider to visit their house or office for spray. After that for a long period, they get rid of the pests. There are often places where you think that there will be no pests over there, but when you check they are there with their little shelter. Often pests are everywhere near you. One of the best tips to get rid of pests is deep cleaning and keeping a hygienic environment.

Pests from the hidden places

Pests often hide in dark places, moisture places, and messy places but sometimes we don’t except pests from such areas. If we ignore this pest they became more and more and make the surroundings messy and dusty. Below there are six places that we think there should be no pest but they are there.

Pest-like shady places where there they can easily live. Pests like bed bugs often found in rooms that aren’t often used or underneath the bed, tend to be a great hiding spot for insects of all kinds. Spiders especially love dark spaces and tend to spin their webs in spots that aren’t disturbed. It’s important to keep these areas as clean and tidy as possible.

The wardrobe is the most used area of the house but we didn’t notice any pests over there. Most of the insects love to feast on stuff. Pest made holes on clothes while chewing when they get a chance. Pest is not only found in the wardrobe but we see it when we open our season clothes out from our closets.

Most of the time we found cracks and often ignore that places, but pests like insects, cockroaches, live in between the cracks. As pests are mostly small in size. They make their home anywhere they found spaces and we are not excepting pests from such areas. Ants are often found in between the cracks and live in the form of a colony and mostly they damage those areas. To get rid of the pest fill the cracks as early as possible.

Kitchen slabs are the most common use area in any house. Whenever we cook food, we use the kitchen slab for cooking purposes, sometime after cleaning we found tinny cockroaches and ants over there. Make sure to clean up your kitchen as soon as possible after finishing your meal for getting rid of such an expected pest. In the summer season pest often attack the messy food in the kitchen. Keep your leftover food in the air-tight jar box after you have finished the meal so that you will get rid of the pest in the kitchen slabs.

6: Accept pests from the exposed pipes

As many of our pipes and holes are made outside of our homes, they are a great place for pests to get inside the washroom. Cockroaches love moistures and they are often found in the bathroom sinks even after we have cleaned the washroom. Most mice use the drains to get in the home. Cockroaches also use pipes to climb.

Keep an open eye on these areas of your house. If you see a single pest from a place where you don’t accept pests at that place there must be a huge team of pests around there as most of the pests live in form of a colony. With the help of a professional pest control team, you can get rid of such pests. Secondly, you can also use DIY ideas and keep your surroundings clean. 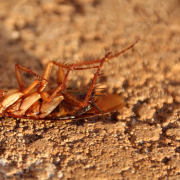